The Company consolidated its leadership in Colombia; sales reached more than COP 3.3 billion in 1Q22, a growth of 20.8% compared to the same period in 2021.

Grupo Éxito recurring EBITDA grew by 15.8%, with a margin of 7.7%, as a result of strong commercial dynamism and operational efficiencies in the three countries where it operates.

The strength of the omni-channel strategy in Colombia led direct and e-commerce channels to reach an 11.8% share of the country's total sales during the quarter. E-commerce continued performing despite the arrival of “the new normal” indicating a structural change.

Grupo Éxito was included - for the third consecutive year - in the Dow Jones Sustainability Index 2022 Yearbook. In addition, jointly with the UK Government and WWF Colombia, the Company presented the project “Sustainable Consumption and Livestock: Partnership for Conservation and Biodiversity”.

Support for small and medium-sized businesses continued. The Company developed the business roundtable “Valluno compra Valluno”, in which, 14 trade negotiators and suppliers identified opportunities for joint work. To date, there are more than 40 new

coded suppliers in that southwestern region in Colombia.

Confirming its commitment to the reconstruction of the social network, Grupo Éxito participated in the launch of “Paissana”, a brand presented by the national government aiming to promote the marketing of products from territories affected by armed conflict.

The operation in the three countries remained profitable, favoured by efficiencies from expenses growing below sales levels and the strong contribution of retail favoured by increased traffic to stores and shopping malls. Consolidated net revenue during the quarter reached 4.6 billion, a 20.5% growth compared to the same period in 2021. The outcome was attributed to the positive performance of the retail business and the contribution of complementary businesses, mainly real estate. The share of e-commerce and direct commerce channels reached 9.4% of the consolidated total sales, showing a consistent customer-focused strategy.

“The favourable effects of the economic recovery in the region, the consistency of the innovation strategy and the impulse of omni-channel, led to a historical performance in the three countries where we have operations. Sales grew by 20.5%, exceeding our best expectations and confirming the strength of demand and the attractiveness of our business offer to different market segments. The Uruguay operation continued with a solid 11.2% recurring EBITDA margin, and in Argentina, the results were leveraged by the real estate business that maintained occupancy levels of around 90% and a substantial recovery in profitability.

We will continue to invest in innovation as an engine of differentiation, to renovate between 50 and 60 stores in Colombia, including 6 hypermarkets acquired from La 14, and to strengthen omni-channel to continue connecting physical and virtual retail businesses. At Grupo Éxito, we are driven by hope, optimism, and the desire to be part of the dreams of millions of customers. We believe in the power of transforming and developing our countries together, to

strengthen trust that motivates us to do things well and challenge us to give the maximum possible. We are moved by solidarity, responsible, transparent, and long-lasting relationships, in which we care for each other and for the planet. We would like to contribute to the growth and well-being of our region and that is the reason to declare our superior purpose for the future: “to nurture with opportunities,” said Carlos Mario Giraldo Moreno, Grupo Éxito CEO.

All figures expressed in millions of Colombian pesos (COP) 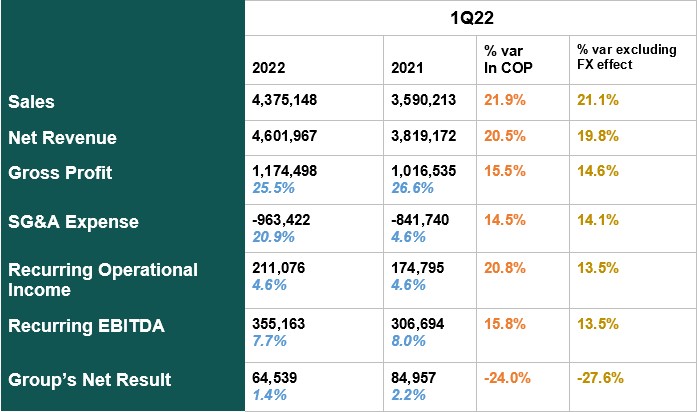 Colombia registered a consistent growth in sales, attributed to the coherence of the omni-channel strategy, the differentiation of formats, and the contribution of the real estate business. As such, the Company continued to consolidate its leadership in the retail sector in the country.

The operation in Colombia represented close to 76% of consolidated net sales in 1Q22, totaling more than COP 3.3 billion with a sustained growth during the last quarter (20.8%) versus the same quarter of the previous year[GA1] . This is the result of the contribution of the omni-channel strategy, innovative formats, and commercial dynamism.

Similarly, the recovery of traffic in shopping centers and stores benefited the performance of complementary businesses, such as real estate, which helped leverage growth of the company's revenue.

The recurrent EBITDA of the operation in Colombia was COP 261,809 million, which increased 8.4% compared to the same period in 2021, as a result of strong retail contribution and operational efficiencies.

The share of sales through e-commerce and direct commerce channels remained at double-digit levels (11.8%). The Company continued to strengthen its last mile service, which grew strongly in deliveries.

Innovative formats continued with a significant return on investment, which, strengthened the Company's profitability:

Nurturing Opportunities for Colombia, more than a declaration is a ratification of a commitment to caring for the planet, generating employment and rebuilding the social network.

In Uruguay, sales continued to grow as a result of the reactivation of the tourism season and the gradual recovery of the local economy.

During the 1Q22, the Uruguay operation registered sales growth of 11.1% in local currency, compared to 1Q21, and participated with 17% of the Group's total sales. Sales through the e-commerce and direct commerce channels continued to consolidate and grew 10.5% and represented 2.6% of total sales in the country. The FreshMarket format posted a strong share of total sales of 46.6%, with growth of 13.7 percentage points over non-refurbished stores. Recurrent EBITDA grew 31.6% and reached a 11.2% margin over revenues of Uruguay's operation, thanks to operational efficiencies and tight control of expenditures. Uruguay continues to be the Group's most profitable operation.

In Argentina, the real estate business contributed to the result, and the operation registered a better retail performance from commercial dynamism and the gradual reopening of the country.

The operation in the country registered a sales growth of 62.4% in local currency during the quarter, higher than the high levels of inflation that reached 54.1%. This was achieved thanks to the reactivation of the country, the change on mobility restrictions and the increase in traffic to real estate assets that led to occupancy levels of 89.6%. The evolution in sales reflected the improved performance of the retail business driven by the sales of fresh market stores and the evolution of the direct and e-commerce channels that represented 2.3% of the total sales of the quarter in this country. All in all benefitted EBITDA margin that closed at 2.4% in this period.