Grupo Exito’s New Board of Directors has been Elected 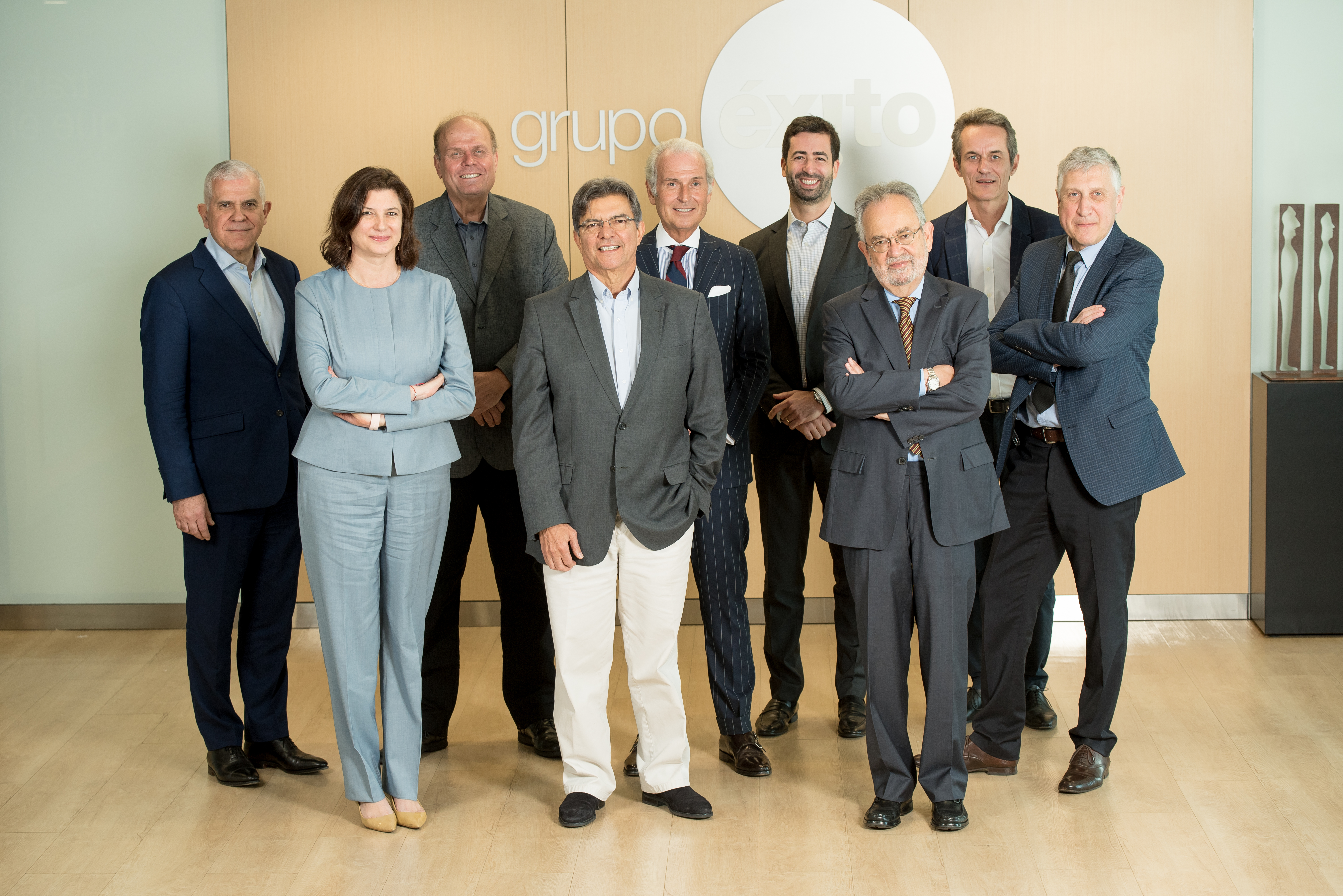 During Grupo Éxito's General Shareholders' Meeting, at its Extraordinary Meeting held today, the Board of Directors for the period 2020-2022 was appointed.

The new Board of Directors of Grupo Éxito is composed of three independent and six non-independent members as follows:

Carlos Mario Giraldo Moreno, Grupo Éxito CEO, highlighted the assessment report done by the Appointments, Remuneration and Corporate Governance Committee and by the Board of Directors itself and stated that: "The new Board of Directors is made up of a senior team with relevant and highly competent management expertise. It will also enjoy diversity and the complementariness of its members.” Mr. Giraldo also highlighted their comprehensive and broad vision to achieve the growth and development of the Company, and the high level of expertise in retail and in other key industries , which will guarantee a comprehensive analysis of the Company's strategy and the continuity of the business in the short, medium and long term. Finally, the extensive experience of the candidates reflects that they are professionals with criteria and major judgement elements, whom openly express their opinions and generate in-depth discussions, oriented towards making high-impact decisions that facilitate the management of the Company's administration, through actions based on integrity, ethics, trust and mutual respect.

He was General Manager of Interconexión Eléctrica S.A., CEO of Asofondos, CEO of Flota Mercante Grancolombiana, Executive Director of the Inter-American Development Bank and Minister of Finance. He is currently Chairman of the Board of Directors of Almacenes Éxito S.A., and of Grupo de Inversiones Suramericana S.A., and is member of the Board of Eléctricas de Medellín Comercial, Emgesa S.A., among others, and has been member of the Board of Directors of Avianca, Banco de Bogotá, Bavaria, Caracol Televisión, Bolsa de Valores de Colombia, ISA, among others. See more.

Mrs. Ibáñez holds a degree in Economics from the Andes University and a Master and PHD degrees in Agricultural Economics and Natural Resources from the University of Maryland at College Park.

She has been Main Economic Advisor for the Vice-presidency of Sectors and Knowledge at the Inter-American Development Bank since April 1, 2019. She was dean from 2012 to 2016 and is currently full professor at the School of Economics at the Andes University. She has been invited as a professor by the Yale University, Princeton University and the University of Sussex.

She has been a researcher and consultant for: Fedesarrollo, World Bank, University of Maryland in College Park, Inter-American Development Bank, among others. She has participated and led forums and research on subjects related to sustainability, diversity, inclusion and female leadership.

She is currently part of the Board of Directors of Almacenes Éxito S.A. and has been a member of the Boards of Directors of Fundación Éxito, Fundación Saldarriaga y Concha, Banco BBVA, among others, and member of the United Nations Peacebuilding Fund, of the Academic Council of the Andes University and part of the Advisory Group of the World Poverty Commission of the World Bank, among others. See more.

Mr. Ayerbe holds a Doctor degree in Law from the Andes University. He also has studies in Arbitrage and International Law and in Common Law from the University of New York. Since 1974 to date, he is a senior lawyer at Ayerbe Abogados. He has participated as major advisor in different M&A processes of large corporations such as: Bancol S.A., where he accompanied and advised the process for the acquisition of Banco de Colombia S.A. of Fogafin, and in the Gilinski Group in the sale of Banco Andino S.A., among others. Due to his expertise in financial, commercial and corporate law, he has been legal advisor for issues related to acquisitions, stockholder contracts and stockholder representation.

Mr. Estermann is the CEO of GPA since April 2018, and has been recently appointed as responsible for the operations in the region.

He was Infrastructure and Strategic Development Officer of GPA from June 2014 to October 2015.He has developed his career in different industries and the service sector, and in large and leading companies with different areas of expertise, differentiated in terms of technology, management models and cultures.

Mr. Hidalgo holds a Bachelor’s degree in Private Law and in Finance and Accounting, both from the University of Bordeaux (France).He has been CFO (Chief Financial Officer) of GPA since 2012 and was CFO of Almacenes Éxito S.A. (Colombia) from 2010 to 2012. After joining Casino in 2000, he held several positions in finance and controllership in the Group. He was also CFO of the retailer Castorama, in Brazil between 1996 and 2000.

Since 2017, Mr Hidalgo is member of the Board of Directors of CNova in the Netherlands and of Financiera Banco Itaú, in Brazil since 2014. See more.

Mr. Russowsky holds a bachelor’s degree in Business Administration from Pontificia Universidade Católica do Rio Grande do Sul (Brazil) and an MBA from Columbia Business School in New York.

He has served as Director of Corporate Development and Holdings at Casino Group since 2012. Previously, he was an investment banker specialized in M&A and capital markets transactions at Credit Suisse, Morgan Stanley, and Oppenheimer & Co. He worked at HSBC and Safra Bank, focused on credit transactions. See more.

Mr. Petit has a degree in Accounting and Finance (DECF) and a Diploma in Higher Studies in this same matter.

Mr Petit has developed his entire professional career in the Casino Group since 1983 and currently holds the role of Deputy Financial Director for Latin America and General Director of Casino Services France. He has also undertake leading roles in the Accounting, Controllership and Audit departments of the Group.

Mr. Alarcon has a degree in Finance and Accounting from the Institut Universitaire de Technologie de Saint-Étienne and a postgraduate degree in International Management from École des Hautes Études Commerciales de Paris (HEC París). He has been Casino Group’s International Coordinating Director since 2011 and has worked for the Group since 1983. He has held roles as Chief Financial Officer in various subsidiaries of the Group, including industrial subsidiaries, supermarkets and restaurants, and was General Manager of the real estate business. He held the position of Chief Financial Officer of Casino Poland for 8 years and then held the position of CEO of Real Estate activities. He has been member of the Board of Directors of Almacenes Éxito S.A. since 2012, from GPA since November 2019, and member of the Green Yellow Supervisory Committee, in France. See more.