Grupo Éxito's consolidated net revenue in 2021 reached COP16.9 billion (+7.5%), boosted by a major macroeconomic and operational recovery in the countries where the Company operates.

Consolidated sales grew 7.1% compared to the previous year, excluding the FX effect. In Colombia, sales grew 5.5% and totaled COP12.3 billion pesos, driven by the performance of innovative store formats, omni-channel, and the recovery of real estate and financial businesses.

Annual Consolidated recurrent EBITDA reached COP 1.5 billion (+20.7%) to a 9.1% margin. Operational improvement was the result of a customer-centered strategy, innovation, omni-channel and the offering of complementary services, both physically and virtually.

At the end of 2021, Grupo Éxito Consolidated Net Income was COP 474,681 million, 2x versus 2020, from operational improvement and good commercial dynamics.

On-line and direct channels in Colombia accounted for 11.9% of sales and totaled COP1.5 billion in 2021. At the consolidated level, omni-channel accounted for 9.9% of the Group’s total sales.

For 2022, the Company will continue its expansion plan of innovative formats (Éxito Wow, Carulla FreshMarket, Super Inter Vecino, Sutimayorista and Surtimax) of between 50 and 60 stores in Colombia (including 6 hypermarkets from La 14).

Grupo Éxito continued to strengthen its strategy to operate responsibly and in a sustainable manner.  To highlight, the promotion of sustainable trade through direct purchasing directly from farmers and peasants, support for child nutrition, and the neutral carbon certification granted by ICONTEC to Carulla FreshMarket, which positions it as the first certified food retailer in Latin America.

The operation in Colombia represented 77% of the Group's total revenues. Revenues in the country grew 7% compared to the previous year, leveraged by the contribution of innovative formats that accounted for 33.3% of sales and recovery of complementary businesses, mainly real estate, finance, and travel. International operations achieved revenues of COP3.9 billion, marked by a better economic and commercial dynamic that resulted in 12.7% growth, excluding FX effects.

The Group's profitability improved significantly in 2021; recurrent EBITDA grew by 20.7% to COP1.5 billion with a margin of 9.1%, compared to 8.1% the previous year. Net income was twice that reported in 2020, and reached COP474,681 million, from a solid retail business performance, the recovery of complementary businesses and more efficient operational and financial structures.

“2021 was a year marked by hope amid so many challenges.  In Colombia, the start of the year was complex, affected by store closures and unemployment. In Uruguay, we had the worst tourism season, and in Argentina we faced macroeconomic difficulties. However, the Group quickly adapted and managed to capture important opportunities. Thus, we closed the year with improvements in revenue and profitability, thanks to the strengthening of our digital strategy, supported in our store network, the consolidation of our innovative formats and the recovery of businesses as important as the real estate and the financial. During 2021, we worked on our ulterior purpose: “nurturing Colombia with opportunities,” through consistent activities to support child nutrition, local and direct purchasing from producers, and our suppliers, especially small and medium-sized enterprises. At Grupo Éxito, we are driven by hope, optimism, and the desire to be part of the dreams of Colombians and believe in the power of building a better country together. We know that acting integrally builds trust and that, today more than ever, we have to give the maximum possible to achieve balanced growth in economic and social aspects, as well as in the protection of our planet. 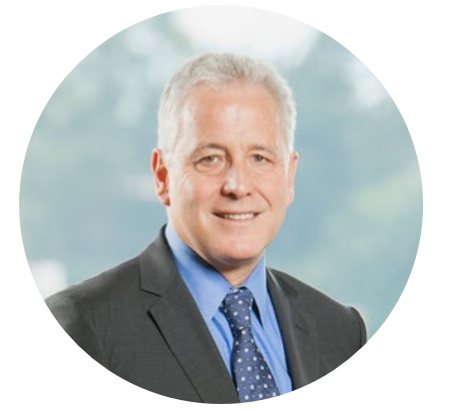 The operation in Colombia achieved significant growth, 136 basis points in the recurrent EBITDA margin, from a more efficient operation.  The Uruguay operation continued to be the most profitable in the region with a margin of 10.2%, and in Argentina, the recurring EBITDA margin grew almost twice, to 3.4%, leveraged by the recovery of the real estate business in the midst of a challenging economic environment,” said Carlos Mario Giraldo Moreno, Grupo Éxito CEO. 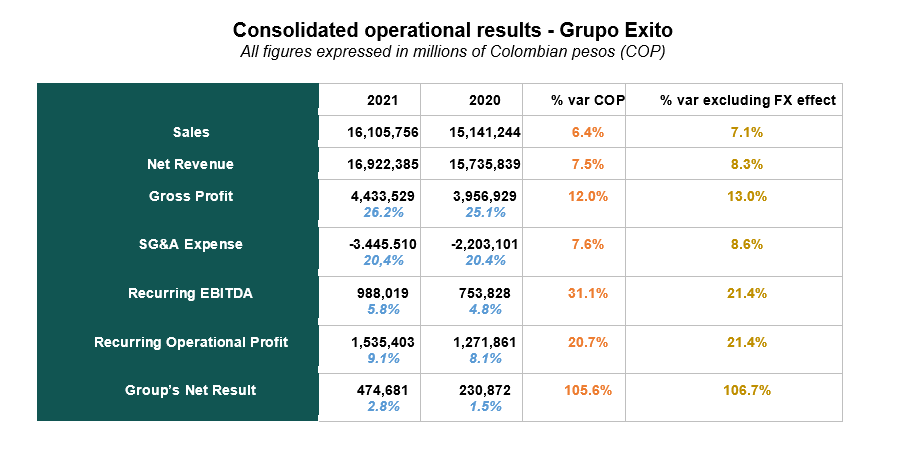 Net Revenue in Colombia reached COP13 billion, a growth of 7% compared to that recorded in 2020 and above the inflation levels of the year. Sales grew 5.5%, reaching COP12.3 billion, driven by the performance of the retail business, benefited by investments made in the continuous improvement of the customer experience, and the renovation of the physical stores, mainly in innovative and convenient formats. The positive performance of the operation in Colombia was also leveraged on the dynamism generated by the economic revival of the country, which boosted consumption in stores and traffic in shopping malls that led the real estate business to a reach of 93% in occupancy levels.

Recurrent EBITDA grew 25.1% and exceeded COP1.2 billion, with a margin of 9.4% revenues exceeding the 8% of 2020. During 2021, the Company strengthened its retail business in the country by maintaining a strategy focused on three broad pillars:

1. Omni-channel, which achieved a strong share in sales of 11.9%. This result was leveraged on:

2. Innovation in formats as a differentiation strategy to deliver superior customer experiences by accelerating expansion across all brands:

For 2022, the Company has an expansion plan on innovative formats, which includes conversions, remodellings and openings of between 50 and 60 stores (including 6 hypermarkets previously operated by La 14) and the investment in technology and logistics for digital sales and last mile deliveries.

3. Monetization of traffic in stores and real estate assets continued to be a growth engine driven by economic and commercial recovery in the second half of the year, through the following businesses:

2021 was a year to deliver the maximum possible and to strengthen community relationships, solidarity, and care for the planet. The following achievements are highlighted:

The Uruguay operation remained the most profitable in the region

The operation in the country strengthened its value proposal of the FreshMarket model, which represented 45.2% of the sales in the country; four stores were renovated under this concept, reaching a total of 23 stores.  One of the main levers of growth during the year was the strengthening of digital channels, whose sales grew 9.8% in local currency and reached a share of 3.6% of total sales in the country. The recurring EBITDA margin reached 10.2% and remained the highest in the Group, thanks to constant cost control efforts and operational efficiencies.

In Argentina, the recurring EBITDA margin almost doubled, favored by the recovery of the real estate business

The operation in this country showed a growth in revenues of 46.8% in local currency, thanks to the greater dynamics of the real estate business that reached occupancy levels of 90.4%. Additionally, contribution was made by the performance of the retail business and the evolution of omni-channel, with a 2.6% share in sales. The recurrent EBITDA margin was 3.4% in 2021, almost double that recorded in 2020 (1.8%), because of strict expenditure control that grew below inflation.