Grupo ÉxitoÉxito consolidated net revenue reached COP15.7 billion in2020, +2.9% compared to 2019, a result of the company's rapid adaptation to customers´ needs and new forms of purchase.

mainly benefited from the contribution of the retail and the strict control of expenses.

E-commerce and direct sales channels in Colombia reached a12.4% share of sales, 2.7x compared to the previous year. More than 8.5 million orders were delivered, of which 85% were home deliveries, 1.8x more than in 2019.

The Éxito and Carulla stores were certified by ICONTEC as “biosafe” (security conditions for customers), in line with the aim of turning stores into a reliable extension of our customer’s home for clients and collaborators.

Grupo Éxito consolidated revenue in 2020 reached COP15.7 billion and grew by 2.9% compared to the previous year. In the midst of a challenging context for the region, with government-issued lockdowns and mobility restrictions in all three countries to prevent the spread of the COVID-19, the company managed to adjust its business model to the new needs of consumers and executed a successful operation during the year, boosted by its omnichannel strategy.

The result was leveraged by the 7.1% increase in food sales, because of the positive sales performance of direct and electronic commerce channels, which increased 2.6x in 2020 and represented 12.4% of sales in Colombia and 3.3% in Uruguay, as well as the strong growth of innovative formats in the two countries. The operation in Argentina partially offset the economic slowdown that the country is experiencing with the implementation of digital channels and commercial agreements with the tenants of the real estate business.

Colombia's revenues grew 3.7% billion from the previous year and reached COP12.2 billion, representing 77% of the Group's consolidated revenues, a positive result marked by the retail business. International operations accounted for 23% of the Group's total, amounted to COP3.6 billion and increased in 12.7% excluding the FX effect.

Operations in all three countries continued to report improvements in productivity as a result of strict control of expenditures, which grew below top line in each country, thus, contributing to the profitability of the organization.

Grupo Éxito achieved a recurrent EBITDA of COP1.3 billion with a margin of 8.1%, and obtained a net income of COP231,000 million, 4x the result of 2019.  Results reflected a remarkable performance in Uruguay, the retail business in Colombia, lower financial expenditure associated with a better capital structure and the contribution of associates, which offset the temporary impact of the COVID-19 on complementary businesses, and a higher tax provision.

“2020 was a historic year for all of us, a year in which we could not settle for the minimum expected and which required us all to give the maximum possible. To do this, we innovated every day to smoothly adapt to the new realities. A sustainable reaction was fundamental, guaranteeing not only the strength of the company, but also the protection of employment, of our suppliers and solidarity with Colombians and with early childhood. The results demonstrated outstanding business performance, because of the assertiveness of the customer-centered strategy focused on omnichannel, innovation and digital transformation. Surprising our clients with the Éxito Wow, Carulla FreshMarket and our hard discount formats, and reaching homes directly during the time of confinement, made all the difference. It fills our hearts to have been able to anticipate payments throughout the pandemic to more than 1,000 small and medium-sized suppliers, guaranteeing their continuity and to have arrived through the Fundación Éxito, with more than 254 thousand nutritional packages, to the homes of children, contributing to their proper nutrition. During the pandemic, the points of sale were constituted as the “second home” of Colombians thanks to the strengthening of protection and hygiene measures in all stores and departments that enabled the earning of the biosafe operations certification by ICONTEC for the Éxito and Carulla brands.

Uruguay grew its revenue by 10.3% in local currency, above inflation, and reached a strong recurrent EBITDA margin of 10.3%; in addition, e-commerce and direct commerce channels had sales growth of 61% and accounted for 3.3% of total sales. The operation in Argentina grew revenue by 20.7% in local currency and posted a recurrent EBITDA margin of 1.8% in 2020, a positive result in the midst of a macro-challenging environment in the country,” explained Carlos Mario Giraldo, Grupo Éxito CEO.

All figures expressed in millions of Colombian pesos (COP) 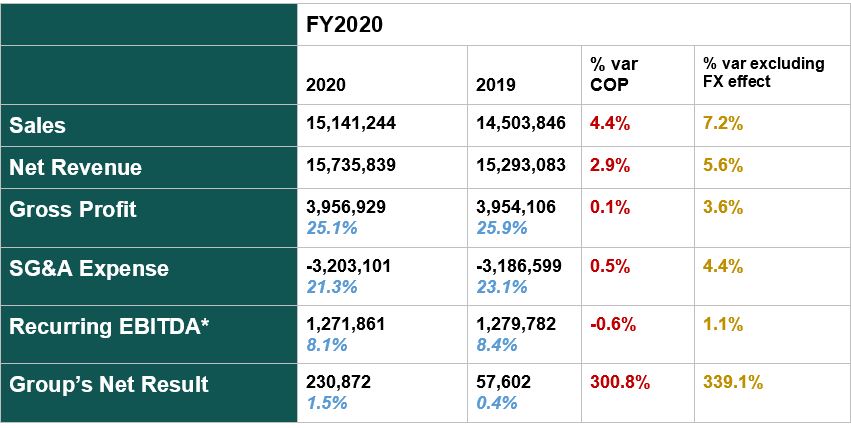 In Colombia, the company's rapid adaptation to new forms of consumption enabled the growth of total sales and same store sales above inflation.

Grupo Éxito's sales in Colombia increased 3.7% compared to the previous year for a total of COP12.2 billion, derived from a 5.6% sales growth, in which, omnichannel and innovation strategies contributed to 75%.

The company reached a recurrent EBITDA margin of 8%, which was favoured by a more efficient cost and expenditure structure and reflected a lower contribution of complementary businesses, affected by the restrictions on mobility due to the pandemic.

The growth and positive results are the result of the adaptation of the company to the new consumption habits of the customers due to the pandemic, which was achieved through the strengthening of electronic and direct commerce channels. Also, innovative formats such as Éxito Wow and Carulla FreshMarket had outstanding performances with double digit sales growth. At the end of 2020, the company succeeded in increasing its market share and strengthening its retail business in the country.

At Grupo Éxito, we understood that year 2020 required the best of each one of us to face this historic moment for humanity. Consequently, as an additional element to the operational issues, we worked under three pillars:

The operation in Uruguay showed consistent profitability and growth from innovation

The Uruguay economy slowed during 2020 due to the measures taken to address the health emergency, which included voluntary and preventive isolation. In spite of this, Grupo Éxito maintained a solid value proposition in its fresh market model and responded quickly to the needs of consumers, strengthening its omnichannel model, this favored income growth of 10.3% in local currency and above inflation (9.4%).

The operation maintained strict control of expenditures and this also favored reporting an outstanding recurrent EBITDA margin of 10.3%, versus 9.2% in 2019.

In Argentina, the company reached positive EBITDA levels amid a complex economic landscape

The macroeconomic context of Argentina was strongly affected by measures of compulsory isolation and mobility restrictions. GDP contracted at the end of the third quarter by 10.2% and inflation closed the year at 35.3%. In the midst of this scenario, Libertad demonstrated resilience through its dual strategy that combines retail and real estate. The latter maintained 90% occupancy levels. Libertad strengthened its direct and electronic commerce channels and accounted for 1% of the company's total sales in this country.

The operation in Argentina showed a growth in revenues of 20.7% in local currency and a recurrent EBITDA margin of 1.8% in 2020, benefiting from the appropriate program of operational excellence that led to expenditures, in local currency, rising below inflation.

In 2020, compliance with the biosafety guidelines endorsed by ICONTEC was confirmed, thus granting the certification of Biosafe Operations to more than 300 Éxito and Carulla stores in the country. More.

Sustainable livestock model, a commitment to protecting the country's biodiversity

Grupo Éxito became the first retail store to implement a conservation model with all its meat suppliers. More information.